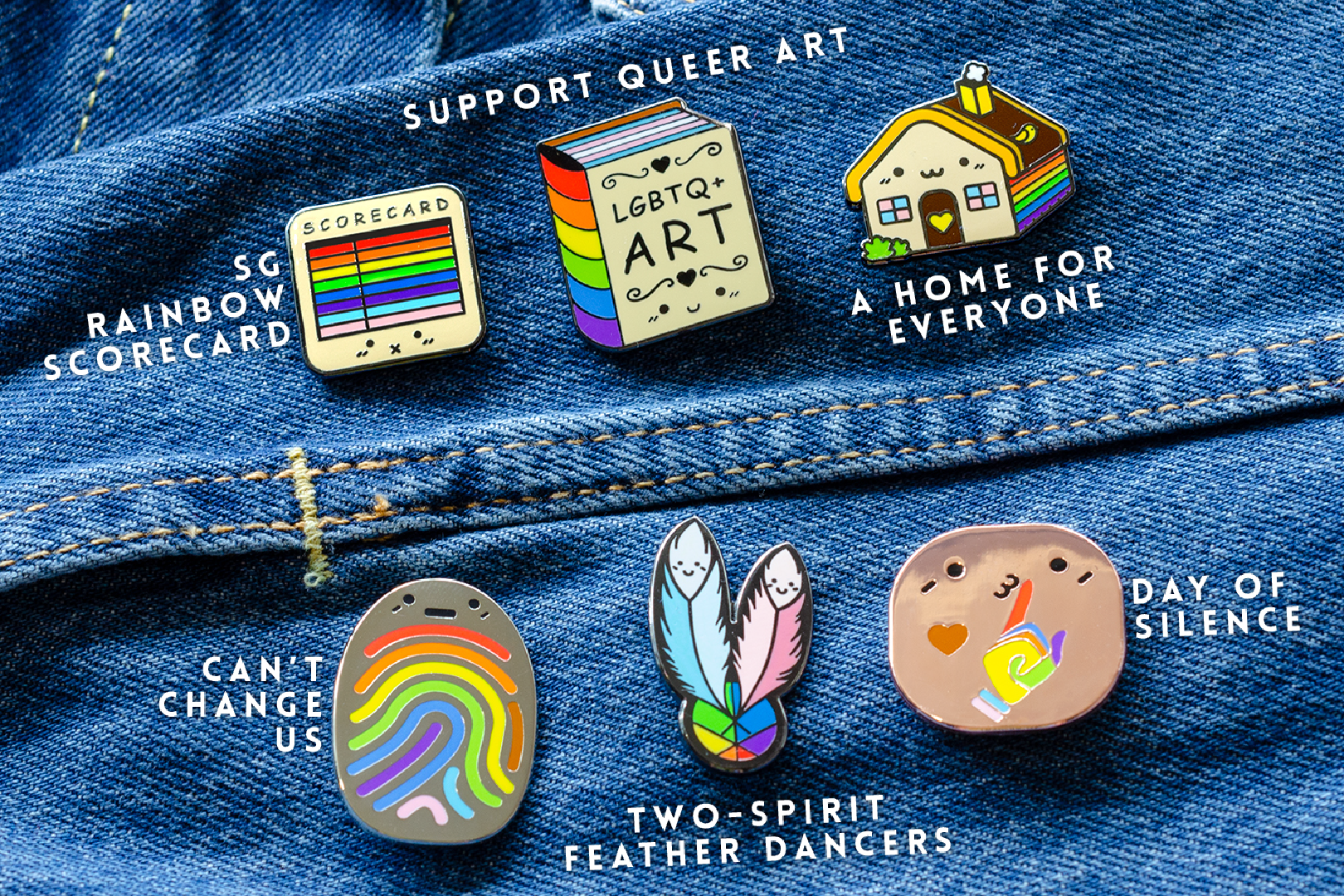 As proud members of the LGBTQ+ community, we're constantly battling for visibility, acceptance, and equality. But despite the progress we've made in recent years, there is still much work to be done.

That's why we're excited to share this collection we've been working on: our Charity Awareness Pins.

We've designed 6 versatile enamel pins that we hope can help spread the stories each one represents.

From homelessness, conversion therapy, the lack of LGBTQ+ representation in political systems, absence of support in LGBTQ+ media/art, bullying and harassment in schools, and shedding light on queer indigenous people who're a marginalized group within our community—we want more people to understand these issues and make a difference. These pride pins are for anyone who wants to stand in solidarity with the LGBTQ+ community all over the world, in multiple facets, because we all deserve to know we're not alone.

As an ongoing campaign, 100% of profits from these 6 awareness pins will be donated to LGBTQ+ charities to support our community in need. We hope you can help a good cause, and together we can make a difference!

A Home for Everyone

When LGBTQ+ individuals are homeless, they are significantly more likely to be a victim of targeted violence, sexual exploitation, substance abuse, and physical and mental health problems. With about 1/4 of UK's youth homeless population being part of the LGBTQ+ community, it is important that we address the issue.

The most common causes of LGBTQ+ youth homelessness are parental rejection, abuse from family, and aggression/violence in family. Furthermore, LGBTQ+ individuals are 14x more likely to be homeless than heterosexual people. Let us stand united and spread awareness about this problem faced by our LGBTQ+ community.

The enamel pin is designed to show that everyone deserves a safe home. Profits will be donated to akt, United Kingdom. akt supports LGBTQ+ youths in the U.K. who are facing/experiencing homelessness or living in a hostile environment. Art is fundamental to our culture as it is able to change opinions, instill values, and share experiences. It is considered a form of communication, and can be used as a vehicle for social change! In addition to being a great way to educate people and spread awareness, it allows LGBTQ+ people to feel safe and accepted. It gives confidence to those who are not out, that one day a future will be brighter for them.

Supporting LGBTQ+ art is the best way to grow our community and spread awareness about our stories, and this cute pride pin is a great way to show your support! Profits will be donated to Queer Art Festival Vancouver to aid them in continuing to be one of the world's leading platforms for Queer art and artists. To support LGBTQ+ art in all forms, check out: Lambda Literary, Raze Collective, Sunpride Foundation, and Pride Foundation Australia. This pin is designed to spread awareness about the harmful effects of conversion therapy. It is frequently also disguised as treatments such as reparative therapy or sexuality counselling.

Youths are most vulnerable to being convinced into conversion therapy. In a 2019 survey by The Trevor Project, it revealed that amongst youth who attempted suicide, 42% had experienced conversion therapy, and up to 2/3 of youth respondents reported someone having someone tried to convince them to change their sexual orientation or gender identity.

Some LGBTQ+ charity organizations that are able to give help to conversion therapy survivors are GLAAD, Born Perfect, and The Trevor Project.

The purpose of this subtle yet meaningful pin is to subtly bring attention to the problem of conversion therapy. Support for conversion therapy survivors and efforts to end the practice will be funded to the BCCDC Foundation. Started in 1996s, GLSEN Day of Silence is a USA national student-led demonstration to spread awareness about the effects of bullying and harassment of LGBTQ+ students. On the second friday of April, students take a day-long vow of silence to represent the silencing of LGBTQ+ students.

It is crucial for LGBTQ+ students to grow up in an accepting environment for their mental and social well-being. LGBTQ youth who committed suicide were 5x more likely to have been bullied. Schools can help to create a safer environment by having a Gay-Straight Alliance (GSA). To learn more about Day of Silence, visit GLSEN's social and website for more information.

GLSEN Day of Silence is a USA national student-led demonstration to spread awareness of the effects of bullying and harassment of LGBTQ+ students, and we designed this enamel pin to show your support in a meaningful way. Profits will be donated to GLSEN. The SG Rainbow Scorecard was designed to spread awareness about Singapore's political parties stance on LGBTQ+ issues. A report found that all political parties were unresponsive or non-commital when questioned about positions on LGBTQ issues. Until Section 377A (an act that criminalizes gay sex) is repealed, we believe the political landscape will remain as status quo. The pin is designed with a face that reads "I have a secret that I can't tell you", similar to the politicians' stance on LGBTQ+ issues.

The rainbow scorecard review report was created by Sayoni to hold politicians in Singapore accountable for their stance regarding LGBTQ+ issues. As Singapore is still a relatively conservative society, many politicians/people consider this a taboo topic to discuss—that's why this subtle pin is perfect in showing your support. Profits will be donated to Sayoni to uphold human rights protection for queer women. Two-Spirit refers to a person who identifies as having both a masculine and a feminine spirit, and is used by indigenous people to describe their sexual, gender and/or spiritual identity. Two-spirited people are well respected in their tribes. They are often given specific roles as they are seen as individuals who are able to connect well with both male and female personalities. They are respected in indigenous cultures and were often looked to as leaders, seers, healers, or mediators.

Two-Spirit people are a marginalized group amongst our LGBTQ+ community that often goes unseen. In our modern heteronormative society where homophobia is frequently normalized, we should learn to appreciate each individual's strength just the way indigenous people do. Profits will be donated to UNYA to provide support, resources and programming for Indigenous youths who identify as two-spirit or LGBTQ+. We as a community need to know what others are going through so we can stand together with them. We're proud of our community for standing up against these injustices. We think these pins will be a good way for anyone who wears them to stand up for what they believe in—and maybe even starts a conversation about it.